We had an Elf visit for Christmas, and he was not on the shelf at all! Luckily students caught him in the act before he could do any damage...

Elves are a thing of Christmas joy, helping Santa to deliver that perfect toy. This year however, an Elf was promised to be on the shelf, but instead he has been playing tricks and been full of stealth. Moving and swinging across college grounds, the students have been letting us know when he has been found. Causing trouble that beggars belief, he stops when students see him, to our relief.

The Elf arrived on the 1st December with the promise to be good, but instead he made a scene and came crashing through our ceiling on a rope. He was making his way down to the ground floor (presumably to steal some of the delicious food in our Refectory), but photos were taken and he had to stop his plan. Our Student Union President Tash even decided she didn't like his antics and started her own personal vendetta against him!

After college closed, he swung across on the rope into our student centre, and made a home for himself in our Christmas tree to sleep overnight. When students got into college the next morning, he had decided it was too uncomfortable to sleep in and begun to try and chop it down. Luckily he was again caught by our students in the act before anything could happen.

Over the weekend, he sat in our student centre (probably playing our Xbox or Table Tennis, or even enjoying himself in our Magazine Corner), making plans for the next week of how to misbehave.

On Monday 5th, he burst into our kitchen and stole some frozen peas, showing everyone who would look how he 'Pea-d' on the counter. He made such a mess, our Refectory and Catering staff pulled the shutters on him and promptly kicked him out, where he wandered across the building.

Tuesday 6th, having somehow obtained a fire extinguisher and climbed with it to be near the ceiling of our ground floor, he tried to spray staff and students alike. He managed to gain one up in the vendetta with Tash, who he blasted with the fire extinguisher!

He retreated back to his hiding spot, and on Wednesday 7th tried to add his own face to our alumni wall. Maybe if he had actually tried one of our many pathways and wasn't causing chaos we may have considered it!

Thursday 8th he went back to our beautiful Christmas Tree and decided today would be the day he would chop it down. Unfortunately for him and fortunately for us, he only got to one of the windows, and was caught before he could leap on it.

Friday 9th he had enough of games, and decided to make his own fairground ride with our revolving doors at the entrance. Reception were not best pleased.

The weekend of the 10th and 11th he relaxed before stealing a lot of chewing gum from our vending machines located in the student centre. On the Monday 12th he felt a bit sick after swallowing too much gum, and couldn't stop blowing bubbles!

Tuesday 13th he decided to turn over a new leaf, and even offered to help our Hairdressing staff to make over some of the hair models that students use in our professional salon. He did a terrible job, and ended up shaving one of the hair models half bald! One of our Engineering students Josh caught him in the act and took an 'elf-ie' with him, after which he stopped messing up hair. 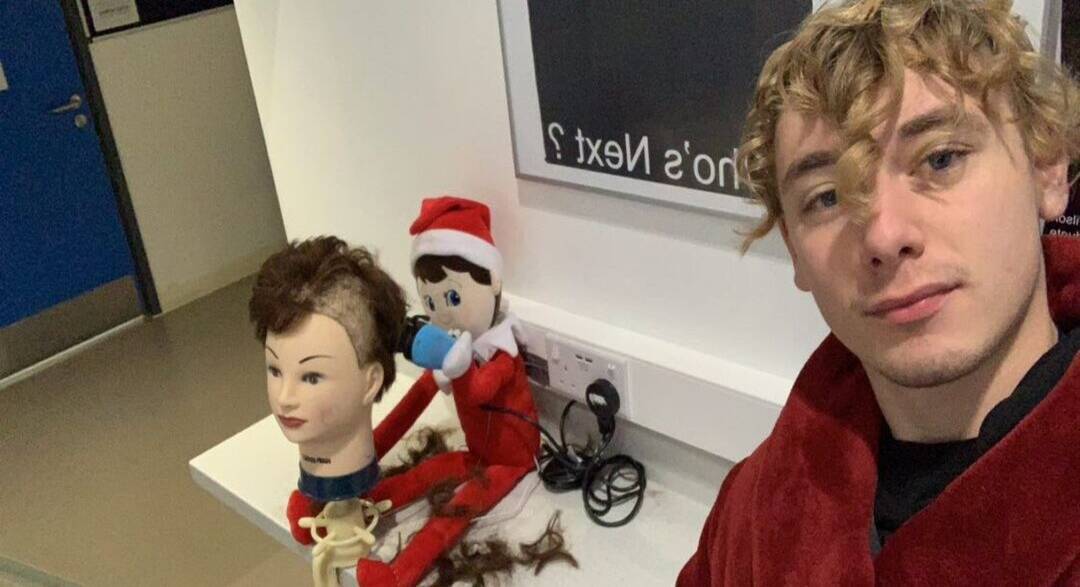 After realising that college was actually a fun environment anyway, without all the pranks, jokes and chaos he had been doing, he decided on Wednesday 14th to help our students be entertained in our on-site Christmas Market. He placed himself at our photo booth, giving students the chance to take an 'Elf-ie' and used his bubble gun to create a photographic atmosphere. He loves college so much, he's now going to have a proper look around at our next Open Day on Thursday 19th January 4 - 7pm!

Many thanks to students Josh, Niamh, Skye, Emily, Sam, Chandrika and Student Union President Tash for their elf photos!

If you want to be like our Elf in that you want to explore college, why not pre-register like him for our Open Day on Thursday 19th January?